You are here: Events » Waste » Sewage

01/07/20 - Exclusive: water firms discharged raw sewage into England's rivers 200,000 times in 2019 Water companies in England discharged raw sewage into rivers on more than 200,000 occasions last year, according to data obtained by the Guardian. The analysis reveals untreated human waste was released into streams and rivers for more than 1.5m hours in 2019. The figures, obtained via environmental information requests, trace releases of sewage from storm drains in rivers across England by all nine water companies and provide a comprehensive picture of the scale of pollution from what critics say is the routine dumping of untreated sewage. Popular English rivers including the Thames, the Windrush, which runs through the Cotswolds and Oxfordshire, the River Chess, a chalk stream in Buckinghamshire, the Avon in Bristol, the Severn, and the River Wharfe in Ilkley are among the many affected. Interactive map to find overflows in your own area

04/02/20 - RADIO: File on 4: Sewage Sludge (37 mins) For decades sewage sludge from waste treatment works has been used as a fertiliser on agricultural land. But File on 4 hears serious concerns over whether it could pose a risk to human health and whether tougher regulation is needed. The practice is perfectly legal. Treated sewage known as 'sludge' or 'biosolids' provides a rich and cost-effective source of nutrients for soil which is then used to grow crops. The process saves more than three and a half million tonnes of human waste going into landfill or being incinerated. But reporter Claire Bolderson hears from scientists worried about the chemicals, plastics and medicines that could be damaging soil and making their way into the food chain. And she investigates the process of regulating the treatment, storage and use of sludge, amid claims from experts that rules are outdated and oversight lacking. Recycling sewage as fertiliser fits today’s environmental agenda for waste. But do we know enough about what the potential impact of the practice might be in the future?

25/06/18 - BBC TVCountryfile: Tom Heap 'EXPOSES’ shocking river problem as viewers rage at Thames Water. Tonight’s segment showcasing the horrific reality in the country’s rivers left viewers truly stunned. Tom explained that a Government warning was issued to get water companies to introduce “monitoring for the vast majority of their Combined Sewage Outfalls (CSOs) by 2020”. It would involve getting water companies to declare how often their CSOs overflow, and for how long. But while the one featured on the programme is now being monitored, according to the presenter, there are still 700 across Britain that are potentially polluting rivers freely. This means only a third of all the CSOs are actually being monitored, and is a worrying figure for water nature and rivers in the UK.

11/10/17 - Sewage plants are leaking millions of tiny plastic beads into Britain's seas Microplastics used in wastewater plants could be contributing to the problem of plastic pollution in oceans with millions of tiny beads spilling into the seas around the UK, according to a new report.

08/04/13 - 19 MW Waste to Energy Plant Fuelled by Fats from London's Sewers  Thames Water say that leftover, low-grade cooking oil and food fat will be collected from food outlets and manufacturers and solidified grease will be harvested from 'fat traps' in restaurants and from pinch-points around the capital's sewer network. 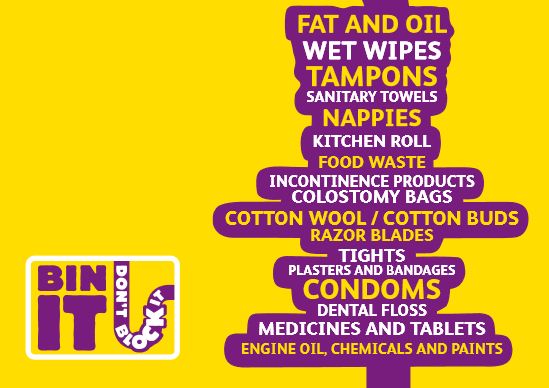 Sewers are designed to carry water, toilet tissue and human waste. . . but people pour lots of things down their kitchen sinks and also down the loo - this results in various problems from blocked drains to water pollution. Thames Water are asking us to remember this and to change our ways, see their Bin it - don't block it campaign. They clear around 55,000 blockages from our sewers each year at a cost of £12m and 7,000 customers suffer from sewage flooding into their homes and gardens – a truly miserable experience.

To flush, or not to flush?

Despite claims on products saying they are 'flushable', the only product to pass water industry 'flushability' tests so far is toilet paper! Manufacturers have their own tests, which are more lenient resulting in a greater number of products being labelled 'flushable'. Although they disappear when you flush your loo, they don't break down in the sewers - they would take several years to disintegrate.  Bin it - don't block it leaflet

A quarter of our food waste goes down the sink!

In UK households, we throw 1.9m tonnes of liquid food, drinks and alcohol down our kitchen sinks - that's more than a quarter of the 7.2m tonnes total edible food that's thrown out. WRAP report 2012

RECOMMENDED BOOKS:
Email bookshare@charlburygreenhub.org.uk to borrow any of these books owned by Charlbury people:
-Books about Waste