The Evenlode is a tributory of the River Thames, it rises near Moreton-in-Marsh and flows south-easterly joining the Thames one mile south of Cassington. It is about 40 miles long and the average flow is 3.7 cubic metres per second. At Shipton-under-Wychwood, the river encounters the hard rock underlying Wychwood Forest and so turns north-east before turning south-east again at Charlbury to continue its meandering route to the Thames.

The Evenlode Catchment is hosted by Wild Oxfordshire, with the support of the Environment Agency and The Rivers Trust. This hosting partnership was only set-up in late 2013 and is still in the process of establishing itself. If you are interested in contributing to the knowledge base about this catchment, or would like to work to benefit the biodiversity and water quality of the area, please contact Wild Oxfordshire’s Catchment Officer.

01/07/20 - Guardian Exclusive: water firms discharged raw sewage into England's rivers 200,000 times in 2019 The Environment Agency issues permits to allow water companies to release untreated human waste, which includes excrement, condoms and toilet paper, from CSOs after extreme weather events, such as torrential rain, to stop water backing up and flooding homes. More than 60 discharges a year from a storm overflow should trigger an investigation by the agency but the data in this interactive map reveals some storm overflows have released discharges hundreds of times. With much reduced staffing levels, the Environment Agency relies on water companies to self-monitor their CSOs.

Earthwatch Fresh Water Watch collects the data from the biannual Thames Water Blitz records for nitorigen and phosphate levels in water courses in the Thames Water catchment area - this is a citizen science project and the collected data can be viewed, analysed onscreen, and also downloaded.

The River Thame Conservation Trust are involved with regular monitoring of riverflies in the Thames Catchment Area as an indicator of river quality. The Angler’s Riverfly Monitoring Initiative (ARMI) is a national scheme, launched by the Riverfly Partnership in 2007 to enable anglers, interested groups and individuals to monitor and help to protect their local rivers. The scheme helps ensure rivers are monitored more widely and at greater frequency than is possible by the Environment Agency alone. 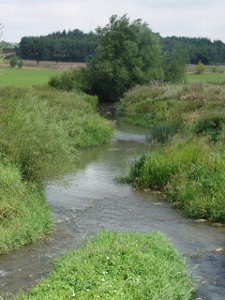 Public access to the river bank is limited in Charlbury to the Mill Field which is the island between the Evenlode and the Mill Stream, but there are views over the river from the Charlbury and Chadlington road bridges and the driveway to Cornbury Park. The Charlbury Canoe Club  meets at 2.30pm on Sunday afternoons and some evenings in the summer, they normally use the stretch of the river from the Mill Stream towards Chadlington. The Oxfordshire Way west of the bridge at Chadlington also gives some access to the river bank. Map of the Evenlode west Charlbury

The circular walk from Charlbury to Finstock crosses the river at Fawler. There is wild swimming near the footbridge at Stonesfield Common from where there is a footpath alongside the river upstream to Ashford Mill near East End. Map of the Evenlode south Charlbury

Members of the Charlbury Angling Club have exclusive fishing rights on the Evenlode, which contains freshwater fish mostly chub, roach, perch, pike, dace, gudgeon but also a few brown trout and bream. The  club operates a strict catch and return policy. Tickets can be obtained at Cotswold Frames in Market Street Charlbury. For more information contact Jane on 01608 810822.

The native white-clawed crayfish is seriously endangered in the UK by the expansion of non-native crayfish which are not only more aggressive but also spread disease. The red-clawed Signal Crayfish was introduced in the 1970s from North America to farmers wanting to diversify into new markets. Native crayfish were found in the Evenlode in the 1990s but they would probably be rarely found now. The Crayfish ARK project provides plans for safe and secret refuges for the native crayfish to prevent them being totally lost in the wild. Photographic identification guide.

Catching crayfish requires a written licence from the Environment Agency who provide identity tags to attach to any traps. Permission is also required from the owner of the fishing rights on the river.

Otters are spreading back into the Evenlode. Otters are protected by European legislation and the 2009/10 National Otter Survey shows that they have recently returned to all the river catchments in England. The major decline of otters in the 1970s was caused by pesticides.

02/02/15 - "I saw two otter last week up at the weir, I was standing on the bridge and they got out at the weir, climbed down the side and then continued down river. It was really lovely to see them so close up. " Louise Whitehead

04/11/13 - "I have just seen an otter in the river Evenlode, I was walking the dog at Stonesfield Common and could hear something munching by the river so I scanned the bank only to see something plop into the water. I stayed to watch the river in the morning sun and suddenly it surfaced. It lay on its back snaking around with the flow of the river. We locked eyes for a moment and then it flipped over and dived. It was such a wonderful and exciting thing to see that I started crying." Alicia Wilkinson 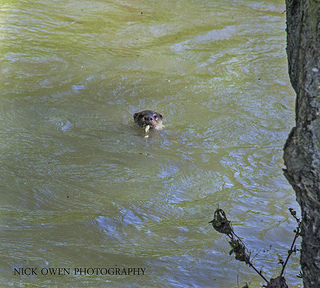 This otter was photographed in the Evenlode near East End in late May 2012 in the middle of the day. "I was photographing a young woodpecker in the tree on the right. I looked down for just a moment and there he was looking right up at me with a big fish in his mouth. Not the right lens or the right settings for this shot, but it is still the shot of a lifetime." Nick Owen

Water voles live in extensive tunnels in river banks of slow moving rivers and ponds. They swim during the day to find a wide range of greenery to eat, they need to find 80% of their body weight every day. Winter mortality is very high because of lack of food and high water levels. Water voles have lost 95% of their range since 1900. River bank engineering and agricultural intensification in the 1950s and 1960s destroyed their habitat and fragmented their population. Then the escape of American Mink  has had a serious effect on these isolated populations through predation - female mink are small enough to enter water vole tunnels. In 1998, the Berks, Bucks & Oxon Wildlife Trust, launched their Water Vole Recovery Project to reverse the decline of water voles in the three counties by undertaking surveys, by working with landowners, and by controlling mink.

The Evenlode is not one of the BBOWT key survey areas, but water voles might still be found here - rats swim with just their heads above the water but water voles float much higher like a cork, so the whole body is visible. Listen out for the plop as they jump into the water. Photographic guide.

American Mink  are found on the Evenlode and have been found taking fish from garden ponds in the town quite a way from the river - they are messy eaters leaving tails and scales behind. Best advice for fish owners is to provide hiding places  in the pond for the fish to escape to and hide from the mink. 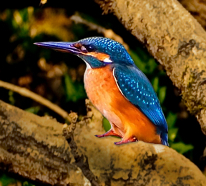 Kingfishers have been seen on the Evenlode, watch out for a flash of brilliant torquoise every time you walk over the bridge - you never know your luck. This one was photographed by Nick Owen at Charlbury.

"One summer 20 years ago I saw a kingfisher alight several times on a fence post by the bridge at Stonesfield Common, it was marvellous - I didn't have my camera so had to commit it to memory - and I still remember it vividly" Christine, 2014

"Walking over the bridge at Cornbury this flash of blue skimmed the water and landed on a tree on the bank" Colin, November 2017