You are here: Events » Food » Sharecroppers 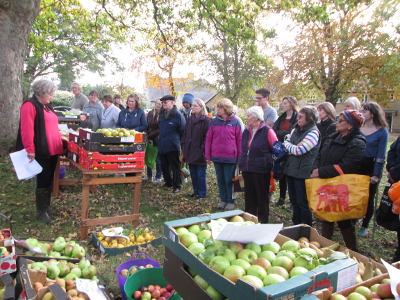 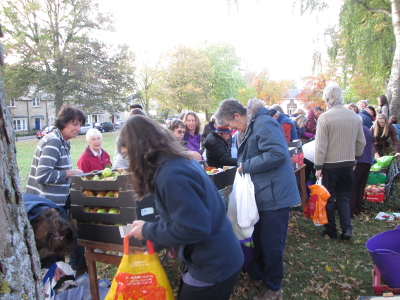 COVID-19 UPDATE - Once again, like last year, we are pleased to announce that we are taking freshly picked fruit to The Cornerstone at The Corner House at the central crossroads in the middle of Charlbury. The Cornerstone is open10am-1pm every day except Sundays. All the fruit and other food from the Cornerstone is FREE for anyone to take - ALL ARE WELCOME. If you have spare garden produce please take it down there yourself, if you have fruit for picking please contact 811057 or sharecroppers@charlburygreenhub.org.uk so that the fruit can be identified and picked when ready. 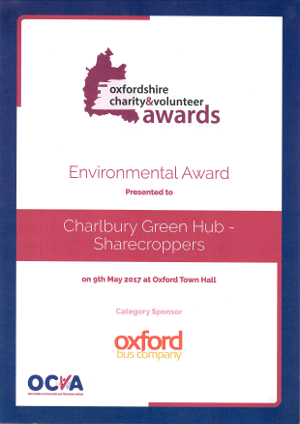 In May 2017, Charlbury Sharecroppers' received the 2017 OCVA Environmental Award from the Oxfordshire Community and Voluntary Action organisation at Oxford Town Hall. This is county-wide recognition that what we are doing in Charlbury is a really good model for other communities to follow. If your community has an Apple Day near the end of October which is a juicing frenzy, then read these links and think again, then read about how Charlbury Sharecroppers deal with the local apple harvest - yes, there is another way to deal with your apples
. . .

27/07/19 - Organic apples are ‘better for the gut’ and healthier thanks to diverse bacteria We eat millions of them every year and they are a staple part of a healthy diet. Yet a single apple carries about 100 million bacteria – and most microbes are inside the apple so it won’t matter how much you wash them. The good news is that they are healthy for our gut and apple eaters who devour the core are also eating 10 times as much bacteria than those who discard it.

01/10/14 - How fruit drinks are causing tooth decay in toddlersJuice drinks aimed at infants are simply not necessary and only contribute to children developing a sweet tooth.

17/01/14 - How fruit juice went from health food to junk food For decades fruit juice has been seen as a healthy option. Then this week a primary school banned it after claims that it's as bad for you as Coca-Cola. But how big a health risk does it pose?

12/01/14 - Fruit juice should not be part of your five a day, says government adviser Fruit juice has as much sugar as many soft drinks and should be removed from five-a-day guidance, says obesity expert

20/05/12 - Dentists' warning on smoothies and juices: popular drinks more acidic than vinegar Health-conscious parents are "misguidedly" letting their children's teeth rot by giving them too many fruit smoothies and juice drinks, senior dentists have warned. 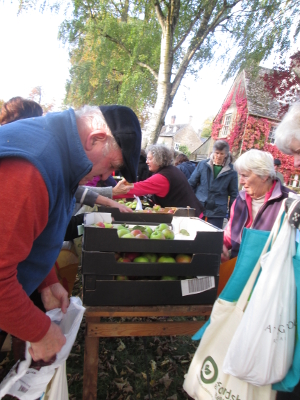 that's what they say in other communities, but it's definitely not true in Charlbury! Enormous thanks to everyone who offers their surplus fruit for picking and redistribution every year rather than see it wasted. We pick fruit from within an 8 mile radius from Charlbury - if you would like your surplus fruit to be savoured rather than wasted, please phone 01608 811057 or email sharecroppers@charlburygreenhub.org.uk.  In 2016 our list of apple varieties reached over 60! 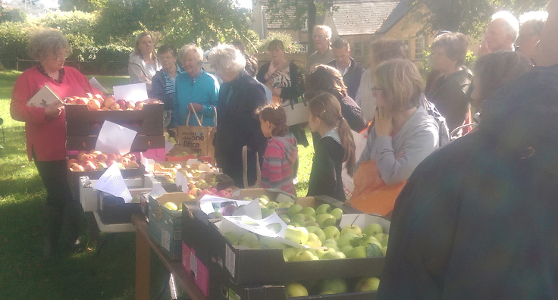 NEWS FLASH: Big Apple Take-Aways used to be held in Charlbury on the Playing Close at 2.30pm fortnightly starting the last Sunday afternoon in August and continuing every other Sunday afternoon through September, October and into November. Due to social distancing required to protect ourselves from covid-19, we are no longer able to hold the Big Apple Take-Aways BUT THE GOOD NEWS is that all the fruit is available soon after being picked at The Cornerstone, Charlbury's new community hub at The Corner House. So if you live locally then please do pop-in for lovely local fresh fruit - and it's all free. A huge thank you to all the fruit tree owners who offer us their spare fruit - this amazingly successful venture wouldn't be possible without your generousity.

"I've started eating and cooking with apples again after years of not being interested in them based on the fruit available in multi-bags (even organic) from supermarkets.  Thank you for providing this wonderful community service." Karen, November 2017

Charlbury Sharecroppers have been doing this since 2008. Fruit is highly dependent on the weather at blossom time, late frosts and hailstorms can damage the blossom and cold rain can deter flying pollinating insects. So some years are "good" or "bad" for plums, pears or apples, and a single event can wipe out a particular variety locally. In 2014 there was a late frost on 3 May and there were hardly any Worcesters or Bramleys around Charlbury, in 2013 a heavy hailstorm knocked off all the Bramley blossom. As the trees get older, some varieties start to produce apples every other year, the local Bismarck trees are highly productive but have become biennial (and in synch!) so we last had Bismarck apples in 2019 and won't have them again until 2021. Locally, 2020 is proving to be a great year for apples, pears and plums. 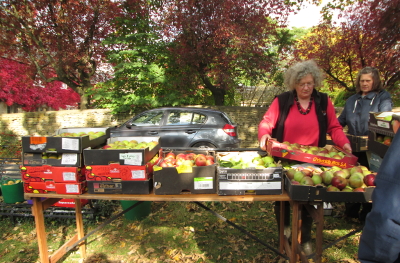 Our virtual community orchard (approx 8 miles radius around Charlbury) includes these 65 apple varieties (listed in order of season for eating at their best, and information about their recorded origins). We have access to trees in a range of places, small gardens attached to houses and pubs as well as larger orchards - an old Victorian orchard where we are still trying to identify the varieties as well as a modern orchard planted up with old varieties (mostly with labels) sourced from Brogdale (home of the National Fruit Collection).  Fast forward a few years to the cropping of the new orchard at Southill Solar and we'll be able to enjoy more of some of our favourites, discover another 24, AND widen the palate of Sharecroppes Gold cider with the 11 varieties of cider apples planted. . . . . So wherever you live, hunt around and talk to people about old trees, who knows what apple varieties might you find on your own local patch? 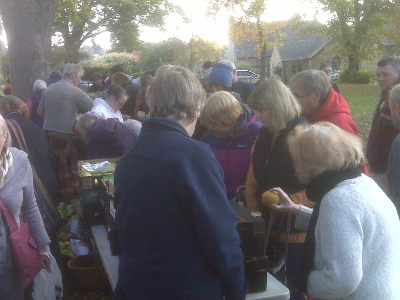 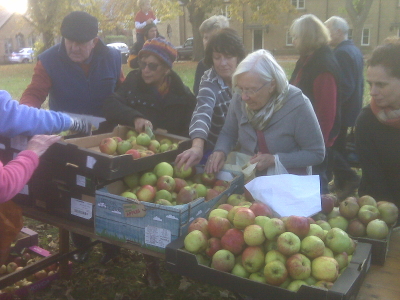 To give an idea of when the different apples are ready - these are the apple varieties available at each of the Big Apple Take-Aways in 2018:

RECOMMENDED BOOKS:
Email bookshare@charlburygreenhub.org.uk to borrow any of these books owned by Charlbury people:
-Books about Food