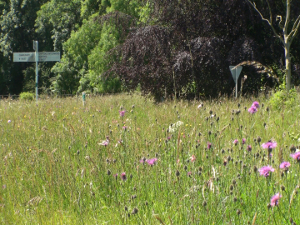 There are several Road Verge Nature Reserves near Charlbury which are managed by the Highways and Transport Team of Oxfordshire County Council. They are marked by white posts with a green band at the top and NR in white letters. 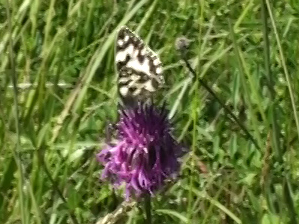 The nearest one to Charlbury is at the crossroads of the Burford road with the Chadlington-Leafield road (map). The range of limestone-loving flowers is magnificent: cowslip, pyramidal orchid, salad burnet, milkwort, bee orchid, hedge bedstraw, rock rose, clustered bellflower, green hellebore, hairy rockcress, meadow cranesbill, common knapweed, and common restharrow. The flowers and insect life, including marbled white butterflies, are magnificent in June and the verges are not cut until the flowers have dropped their seeds in September. 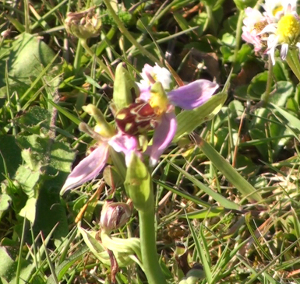 The dry spring in 2011 meant that lawn grass didn't grow enough to be cut, so the wild flowers in our lawns had the chance to grow and flower. On 11 June, this Bee Orchid was found in a front lawn of a house on the Woodstock Road. Ron said he was sitting on the bench and thought it was a real bee on a flower, it was the first time he'd seen it flower in the 15 years he'd lived in the house. He now protects the orchid and a second plant has appeared.

The front gardens and grass verges along the Woodstock Road are remnants of the meadow grassland from before the houses were built in 1927 and some still display the typical limestone flora that used to be common around Charlbury before the introduction of modern fertilisers. If you live along here and have patches of "weeds" in your lawn, then try leaving them uncut during June to see what happens - then, if you find they are interesting wild flowers, you might allow them to set seed and spread.