Footpaths radiate out from Charlbury to nearby hamlets and would have been established centuries ago as people walked backwards and forwards to Charlbury which was an important market town as well as having lots of shops. To illustrate how important Charlbury was as a trading centre for the surrounding area, have a look at the fascinating inventory  of the mercer's shop run by Thomas Harris which was itemised after he died in March 1623. His shop sold cloth and household articles, along with preserved and dried groceries with many spices having been imported from abroad. 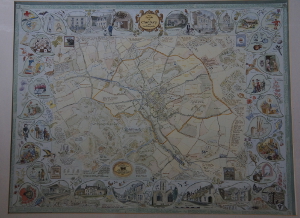 Parishes used to be an important administrative unit making taxes and providing for the poor. Traditionally on Rogation Sunday (5th Sunday after Easter) people of a parish beat the bounds   i.e. they walked the parish boundary to pass on the knowledge to the next generation to avoid disputes about whether people lived in the parish or not. Many parishes, including Oxford, still uphold the tradition (see 6 min film about Oxford).

Our own Annual Parish Boundary Walk  starts at the old oak tree on the Burford Road where the boundary crosses the road and changes direction - ancient trees are often found at corner locations along parish boundaries.  Our walk follows the orange line on the parish map  and is a marvellous opportunity to discover parts of Charlbury that are not normally accessible to the public.

Note: The current boundary of Charlbury parish is much smaller than it used to be - it used to include Shorthampton and Walcot to the west and Fawler and Finstock to the south. At the time of the Domesday Survey in 1086, the area was still wooded and part of Wychwood Forest. The Charlbury, Fawler, and Finstock part of the parish formed a detached part of the Bishop of Lincoln's manor of Banbury which lacked any woodland and so we provided a valuable source of wood for them. Later on the bishop granted this land to Eynsham Abbey. (More on the history of Charlbury) 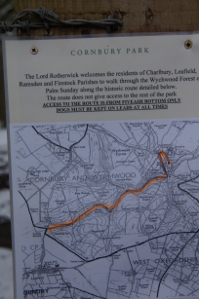 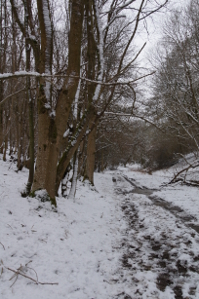 Traditionally folk went to Wort's Well or "Uzzle" to make Spanish Liquor. They took with them bottles containing a spoonful of brown sugar, a piece of liquorice and a black peppermint. At the spring they filled the bottles with water, the resulting concoction was used as a general “cure-all.” Wild liquorice plants grow next to Wort’s Well; which before the introduction of black liquorice, was probably used as the basis for the concoction.

Route 1  - 8 mile walk that takes in the only Public Right of Way through Wychwood Forest - an important remnant of ancient woodland.

Route 2  - 4 mile walk that runs to the north-west of Charlbury, following the Evenlode valley and uses part of the Oxfordshire Way.

The Saltway runs along Charlbury's eastern parish boundary, it is an ancient broad trackway along which salt was taken from Droitwich down to Princes Risborough and later used as a Drovers Road.  The stretch south of Dustfield Farm to the Woodstock Road was designated a SSSI in 1988 to protect the Downy Woundwort which appeared after the thick scrub was cut back, it has since become a Local Nature Reserve.

The Oxfordshire Way is long distance footpath from Bourton-on-the Water to Henley that passes along the Evenlode valley and through Charlbury before passing on to Stonesfield, Kirtlington and Islip. (Detailed maps & aerial photo)

Shakespeare's Way passes through Ditchley Park towards Blenheim Place, it is a 146 mile waymarked path from Stratford-on Avon, Shakespeare's birthplace, to The Globe Theatre in London.

As part of the Millenium celebrations, the Wychwood Project  took the opportunity to create a 36 mile circular trail following existing waymarked rights of way through the heart of the former Royal Forest. This is known as the Wychwood Way and has been designed to pass through or near some of the area's most interesting historic landscape patterns and features, habitats and traditional forms of management. The Saltway along our eastern boundary forms part of the Wychwood Way. (Detailed maps & aerial photo)

A series of four shorter circular walks that link in with the Wychwood Way, maps and directions are on the Oxfordshire County Council website.

Charlbury and the Secret Forest Ride

Information about a 17-mile circular horse or mountain bike ride which circles what remains of the ancient Wychwood Forest, taking in the villages of Ascott under Wychwood, Leafield, Stonesfield, North Leigh and Charlbury. 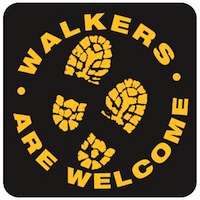 08/02/13 - Charlbury is a member of Walkers are Welcome, a national scheme for towns and villages that welcome walkers.

We hope to attract more visitors to the town, securing a better future for Charlbury's shops, pubs and other businesses; to ensure that Charlbury's footpaths are clear and well-maintained; and to help others share in this beautiful place. We are the only WaW town in Oxfordshire and the only one in the eastern Cotswolds.