In January 2017, volunteers planted an orchard of 55 trees at the southern end of the Southill Solar community-owned solar farm on the Witney road just south of Charlbury. 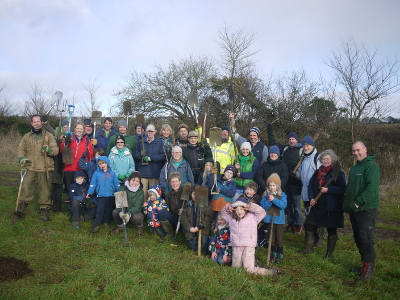 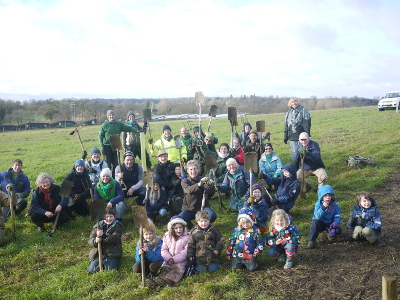 “Lord Derby, Lord Stradbroke, Lord Lambourne and Lady Henniker, may I introduce noble cookers Edward VII, Lane’s Prince Albert, Annie Elizabeth, Tom Putt; and reunite you with heritage eaters Lord Hindlip, King of the Pippins, William Crump, John Standish, Bess Pool, and Winston, and those golden cider makers Harry Masters Jersey and Frederick, who will all be joining us in Charlbury in a few years time from the electrifying new local orchard at Southill Solar.”

You’ll see the new trees – a double row parallel to the roadside hedge between Fawler Mill and the Fawler turn. I’ve chosen favourites like Holstein, Ribston Pippin, Tydeman’s Late Orange, Kidd’s Orange Red, and d’Arcy Spice that we’d like more of as well as 24 varieties I’ve not found locally but would love us to have; also 11 cider apples, bittersweets and bittersharps, to introduce tannins into the palate of our local Sharecroppers Gold cider available at local festivals. I’ve chosen apples renown for flavour and storage - some lasting until May, famous ones like Pitmaston Pineapple, and ancient ones from before 1600 like Catshead and Court Pendu Plat. Most apples in the orchard will ripen October to November but relish the prospect of Tydeman’s Early Worcester a lovely apple ready in late August.

The cider apples near the Fawler turn, on M25 rootstocks, will become large standards but the rest, on MM106 rootstocks, will be pruned as half standards for good quality picked fruit. Below the cider apples come the plums, Victoria and Belle de Louvain (the lovely large red plum I used to pick from a Chadlington tree that died last year) and three greengages. Then come the dessert and culinary apples in flowering order - early blossom higher up to avoid the frost and later blossoms nearer the Mill. Let’s hope there’ll be enough pollinating insects to discover and pollinate this lovely new orchard. (Article by Christine Elliott published in Charlbury Chronicle, March 2017)

RECOMMENDED BOOKS:
Email bookshare@charlburygreenhub.org.uk to borrow any of these books owned by Charlbury people:
-Books about Food