You are here: Events » Global

07/11/19 - Climate Change Communicator of the Year - People’s Choice Award: Kathy Jetñil-Kijiner and Aka Niviâna are poets and activists from communities experiencing the impacts of climate change. Kathy is a writer and performer of Marshall Islander ancestry, and co-founded the non-profit Jo-Jikum, dedicated to empowering Marshallese youth to seek solutions to climate change and other environmental impacts threatening their home island. Aka is from Kalaallit Nunaat (Greenland) and started doing poetry with a wish to create nuanced conversations about not only climate change, but also colonialism and indigenous peoples rights.  Together, they connected their realities of melting glaciers and rising sea levels in a poetic video called “Rise: From One Island to Another.”

29/11/17 - RADIO: A Picture Held Us Captive (30 mins) Novelist, Harvard Fellow and Social Entrepreneur Zia Haider Rahman explores the powerful impact the use and abuse of metaphor can have on the world around us.Metaphors are not simply there for the use of novelists or poets. They are integral to the way we think and understand - pervading our language and allowing us to conceptualise new and complex ideas, using familiar images. They are essential to areas of abstract study, where they provide the basis for new theoretical models, and play a vital role in communicating specialised knowledge to non-experts.But, Rahman argues, these compelling imaginary pictures can also become prisons, trapping our thought in over simplistic or entirely false versions of a more nuanced or entirely different reality. Drawing on examples from the worlds of biology, economics, business and environmental policy, he demonstrates the very real and damaging consequences these metaphors can have.Biologist Stephen Rose and Sociologist Hilary Rose discuss how the misleading metaphors of genetics built the popular enthusiasm for the field's apparently miraculous powers. Economist and Green MEP Molly Scott Cato explains what happened when the "natural capital" metaphor took on a life of its own. Economist John Weeks dissects the metaphors of austerity, "balancing the budget" and "the national credit card". And novelist and ex-McKinsey consultant Dina Nayeri demonstrates how the world of business pushes metaphors to the edge of meaning.

01/05/17 - RADIO: Start the Week: Wendell Berry: The Natural World (45 mins) Andrew Marr talks to the American writer, poet and farmer Wendell Berry. In his latest collection of essays, The World-Ending Fire, Berry speaks out against the degradation of the earth and the violence and greed of unbridled consumerism, while evoking the awe he feels as he walks the land in his native Kentucky. His challenge to the false call of progress and the American Dream is echoed in the writing of Paul Kingsnorth, whose book Confessions of a Recovering Environmentalist eschews the grand narrative of a global green movement to focus on what matters - the small plot of land beneath his feet. Kate Raworth, author of Doughnut Economics, calls herself a renegade economist and, like Berry and Kingsnorth, challenges orthodox thinking, as she points to new ways to understand the global economy which take into consideration human prosperity and ecological sustainability.

08/04/17 - RADIO: Archive on 4: Long Road to Change (58 mins) In an age when technology has made organising protest movements easier than ever before, journalist Zoe Williams asks why we aren't seeing long-term results. She looks back on the global history of activism to discover the pre-conditions needed for concrete change. Recent years have seen an explosion of protest movements to secure equality, protect immigrants, and demand justice. But often these movements are doomed to short-term impact. Does today's activism overlook the benefits of doing things the hard way? By digging into the archives, Zoe looks back to the most impactful protest movements of the 20th century that permanently changed history. By analysing what key elements are needed for success, she will construct new rules of modern-day activism for future generations. Finally, Zoe investigates how to overcome the obstacles that stand in the way of any protest - from radicals that disrupt non-violent marches to handling media coverage - and how government bodies may manipulate protests to their own advantage.

02/01/17 - The New World: Nothing but the Truth (45 mins) Are we really living in a post-truth world? It has been an extraordinary year for the concept of veracity. Brexit. Trump. Experts have taken a beating, facts have apparently taken second place to emotion and feeling. And what about truth? It seems like fewer and fewer people, whether voters or politicians, care what's true anymore. Step forward the Oxford English Dictionary's word of 2016: "post-truth". Is this just shorthand to help liberals make sense of a world they don't like? Or does it mark something more meaningful? Are we really no longer interested in truth or is our toxic political climate clouding our ability to agree on what the facts are? In a series of special programmes as 2017 begins, Radio 4 examines inflection points in the world around us. In the first of five programmes this week, Jo Fidgen explores how our brains process facts when they become polluted by politics.

11/07/16 - RADIO: A Point of View: After the Vote (15 mins) The philosopher Onora O'Neill criticises the standard of public debate on both sides of the European Union decision and asks how this democratic deficit can be repaired.  "The disarray that we now witness, and the retractions, revelations and recriminations that spill out on a daily basis, show that large parts of each campaign failed to communicate with the public, did not offer adequate or honest accounts of the alternatives, and did not provide the basic means for voters to judge the real options, the real opportunities or the real risks." This is the first of a series of special editions of Radio 4's long-running essay programme, A Point of View, in which five of Britain's leading thinkers give their own very personal view of "Brexit" - what the vote tells us about the country we are, and are likely to become.

29/03/16 - RADIO: The Global Philosopher: Should Borders Matter (43 mins)  Michael Sandel explores the philosophical justifications made for national borders. Using a pioneering state-of-the-art studio at the Harvard Business School, Professor Sandel is joined by 60 participants from over 30 countries in a truly global digital space. Is there any moral distinction between a political refugee and an economic migrant? If people have the right to exit a country, why not a right to enter? Do nations have the right to protect the affluence of their citizens? And is there such a thing as a 'national identity'? These are just some of the questions addressed by Professor Sandel in this first edition of The Global Philosopher.

If the Earth
were only a few feet in diameter,
floating a few feet above a field somewhere,
people would come from everywhere to marvel
at it. People would walk around it marvelling at its
big pools of water, its little pools and the water flowing
between. People would marvel at the bumps on it and the
holes in it. They would marvel at the very thin layer of gas
surrounding it and the water suspended in the gas. The people
would marvel at all the creatures walking around the surface of
the ball and at the creatures in the water. The people would
declare it as sacred, because it was the only one, and they would
protect it so that it would not be hurt. The ball would be the
greatest wonder known, and people would come to pray to
it, to be healed, to gain knowledge, to know beauty and to
wonder how it could be. People would love it and defend
it with their lives because they would somehow
know that their lives could be nothing
without it. If the Earth were only
a few feet in diameter.
(Joe Miller) 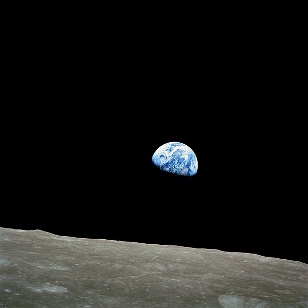 Taken by Apollo 8 crewmember Bill Anders on December 24, 1968, showing the Earth seemingly rising above the lunar surface. Note that this phenomenon is only visible from someone in orbit around the Moon. Because of the Moon's synchronous rotation about the Earth (i.e., the same side of the Moon is always facing the Earth), no Earthrise can be observed by a stationary observer on the surface of the Moon.

On the 40th anniversary of the famous ‘Blue Marble’ photograph taken of Earth from space, Planetary Collective presents a short film documenting astronauts’ life-changing stories of seeing the Earth from the outside – a perspective-altering experience often described as the Overview Effect.

Raised in Vancouver and Toronto. When she was 9 she started the Environmental Children's Organization (ECO), a small group of children committed to learning and teaching other kids about environmental issues. They were successful in many projects before 1992, when they raised enough money to go to the UN's Earth Summit in Rio de Janeiro. Their aim was to remind the decision-makers of who their actions or inactions would ultimately affect. The goal was reached when 12 year old Severn closed a Plenary Session with a powerful speech that received a standing ovation. "I was 12 years old & fighting for my future when I spoke at the Earth Summit 1992. Today I am fighting for inter-generational justice and for my sons' future."

In 2009, a group of 28 internationally renowned scientists identified and quantified a set of nine planetary boundaries within which humanity can continue to develop and thrive for generations to come. Crossing these boundaries could generate abrupt or irreversible environmental changes. Respecting the boundaries reduces the risks to human society of crossing these thresholds.

RECOMMENDED BOOKS:
Email bookshare@charlburygreenhub.org.uk to borrow any of these books owned by Charlbury people:
-Books about Global issues