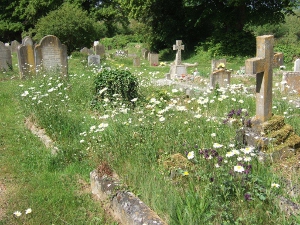 Since 1999, the Town Council's Cemetery has been managed in a sensitive way so that it doesn't look untidy but does allow the wild flowers to flourish. Not only do the flowers look wonderful, but they also provide that bedrock for a web of wildlife such as insects and birds. Basically the grass is cut but areas of flowers are left to set seed and spread.

In 2004, the Town Council was given recognition for this by a special award from the Living Churchyard and Cemetery Project organised jointly by the Diocese of Oxford and the Berks, Bucks and Oxon Wildlife Trust.

From early in the year snowdrops and crocuses bloom, then primroses in April and ox-eye daisies in June. The scallops of grass where these are flowering are left uncut until the plants have set seed and should provide a good source of seed for spreading into other areas. There is a thin strip of grass by the southern wall which is not cut at all which provides essential cover for insects, for example some butterfly larvae and pupae spend long periods in long grass and would be destroyed if the grass were cut.

Some of the older graves are kerbed with gravel and this is ideal habitat for the yellow Lady's Bedstraw, the white Hedge Bedstraw, white Oxeye Daisies and the pink Hedgerow Cranesbill

Only after the change of management did a patch of Meadow Saxifrage become apparent near the Spelsbury Road wall. This is a declining species very uncommon in West Oxfordshire, but it is also found locally in one of the meadows on the Cornbury Estate which is crossed by the Boundary Walk on Rogation Sunday (the fifth Sunday after Easter). Meadow Saxifrage is a perennial and needs to be left uncut until late summer so that it can set seed and spread.