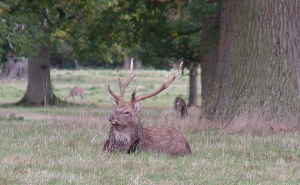 You can’t really get greener than eating venison from Wychwood Forest on our doorstep. Not just because of its low carbon footprint but also the humane way that the deer are killed - being shot by trained marksmen they die without fear. Venison is a very healthy meat low in fat and cholesterol and high in Omega 3.

Within Cornbury Park, there are two herds of deer: Formosan Sika deer (slightly smaller than our native Red deer) and Fallow deer (3ft to the shoulder, they are smaller than Sika) which range in colour from white through melanistic to the almost charcoal black menal and have palmated antlers. Both species have cream spots in summer.

In the forest beyond the Park, there are numerous Fallow, Roe and Muntjac deer. Fallow deer were originally introduced by the Romans from Asia Minor for hunting; they live under cover of dense woodland and come out into the open to graze. Unlike the much smaller native Roe deer, Fallow deer do very little damage to young trees but they do seriously damage cereal crops.

The deer are managed by Wychwood Forest Deer Management and culling takes place between September and April. Older animals go to the game dealer but the meat from the younger animals less than 26 months old is available from local Farmers’ Markets and from Densham’s the butchers in Witney High Street. Carcasses are hung in the fur for only 7-10 days, which means the meat does not develop a strong gamey flavour and is equivalent to other red meats for regular everyday use.

Venison cuts available are steaks, diced shoulder, haunches, saddle fillets and mince. Venison can be said to be the original fast food, medallions cook in just four minutes and tenderloin works well cooked in puff pastry like Beef Wellington. Venison is not a difficult meat to cook but since there is no inter-muscular fat it is important to keep it moist by sealing, covering or basting well. While older cuts are often marinated to tenderise them, this isn’t essential for young venison. Venison recipes